Heeding Gods Call (When You Initially Don’t Want To)
May 31, 2020
Jackson Davis
So my best friend, Lucas, and I recently got back from a pretty short lived trip to a distant land called New Mexico to backpack. Why was it short lived? Well just before leaving I was on my way to His house to pack and such when an uneasiness came up. A voice that I do not believe was just pre-trip jitters was saying “don’t go”, and I did not want to listen. I thought to myself “I hope this ain’t God tryna tell me no.” Regardless I said a little prayer to Him asking to soften my heart if my grandiose plans were to be blotted out. The next day we actually did follow through and head out to New Mexico with the intentions to be back in a week because Lucas had his brother’s wedding to attend to, and a bachelor party to plan.

On the way we teemed with the excitement of seeing the arches in Utah and a beautiful hot spring in New Mexico, but when we got to the first stop, San Antonio Hot Springs, Lucas started to fret about the fact that his brothers wedding was in a week, and here he was spending all his money on a trip without him, when he could’ve been spending his money on treating his brother to some pre-wedding fun. I was frustrated that Lucas wasn’t just living in the moment and letting the warm water and the marvelous view calm his anxieties but then I prayed that God would open me up. That God would help me soothe Lucas’s guilt, and then somehow the words “let’s just go home tomorrow” spilled out of my mouth with utmost sincerity.

​And that’s exactly what we did the next morning, after a twelve hour drive the previous day, we were already packing up to head back home. No Utah, no ecstasy of experiencing a new state, just the sober knowledge that we were doing what was considerate. We were doing what God wanted, we were loving others at the expense of our own desires. We were heeding his call in a direction that wasn’t littered with sick views but was filled with turn arounds and self realization. This past week I learned that listening to God’s voice sets off a chain reaction of love, and that acting completely of your own volition, for your own satisfaction, leads to guilt and indifference. Heed His call, not your own… your load will be lighter.

I had the pleasure of snapping this picture on our way home and it, accompanied with my writings embodies the vast ocean of uncertainty that life can bring, but the elk in the center stands right at the brink with her head up. She is not curled in a ball or frantically running around seeking the end of the fog filled crater, she is stable and unwavering, I don’t know anything about what she’s thinking, but her posture tells me she is ok. I pray that I will be ok with not knowing the perimeters of this life, I will be ok knowing that inside of me is a God who knows the reaches of this fog and the lay of this land like the back of his hand and, that I will follow where He leads. 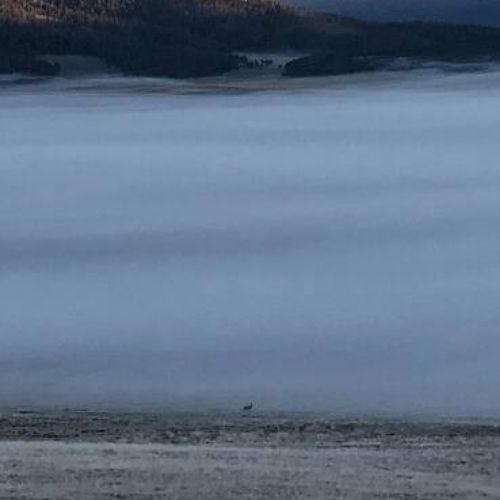